The RallyBird Baseball board game continues to refine! In addition to codifying some new optional rules such as the asymmetrical advantages of a Series, I also corrected a single typo as a favor to you. Here is a truncated teaser! 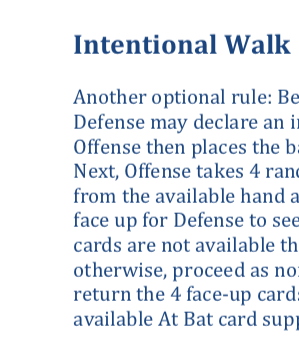 Yes you may read the whole paragraph! Please enjoy the enclosed PDF in good health, leaving a place for a certain round, saddle-stitched microbe called baseball fever.

Click the Ump Bird with Glasses below to download the pdf of the rules for the *Mini* RallyBird Baseball Board Game.

It’s the same game play as the standard sized RallyBird board game, but the different components required different graphics. The PDF has 4 pages not counting the cover. It might be helpful to print it full sized as the game’s rules are smaller to fit in the mini box.

I think the game is ready for sale, but I made a few minor graphics changes to the box that I want to see printed before I promote it. The store page will allow sales soon. Also you can go there to watch the unboxing video. Thanks! 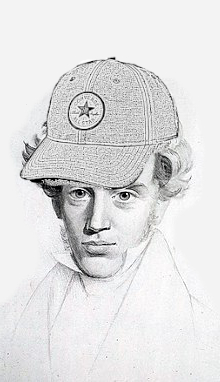 If I may translate the philosopher’s concepts in my own way, then baseball’s four bases represent Søren Kierkegaard’s scoring strategy. They exemplify his coaching observation of the first aesthetic, then ethical, and finally religious modes of base running, with a difficult slide (or leap) of faith to reach Home plate. Kierkegaard argues that one can have faith that the cloud of dust transforms into a Run on the colossal electric scoreboard, but one can never believe it, because the bright click of that scoreboard is beyond muscle achievement and beyond reason. The cerulean Run is something else. This unrelentingly requirement of test on individual strength and resolve relates to the compelling existentialism of baseball.

1st base is an achievement of individual aesthetics, the batter’s skillful use of the passions to swing the bat just right. This does not mean an abuse of passions, but the motivation is pleasure. Who among you has not exalted, as I still do, at the musical sound of the bat hitting the ball in its sweet, sweet spot? O sensual raptures! Mind you, to maximize pleasure thoughtfully, an Epicurean life is smarter, measured, more calculated than a hedonistic life. A runner can take an 11-foot lead from first base, sometimes a 12- or even 13-foot lead, but a hedonistic 14-foot lead? That cannot last. It won’t last. It doesn’t last.

A moment comes when the baserunner found a way to move beyond the limitations of the aesthetic approach and achieved second base. It’s a new way. Wary of mere pleasure-seeking, from oneself the player naturally thinks of the team, of the friendly dugout clearly in view, of what 2nd base represents as the border of a Runner In Scoring Position. From second base the player can easily see the comrade at bat. Trading glances, the second base runner can spy the pitcher’s grip on the laces of the ball and signal, with hand on chin, then hand on knee, that he’s loaded a fastball. (RallyBird’s Take the Pitch card reflects this specific possibility.) This is legal, but baseball’s unofficial regulations frown on it; at least, Defense may respond by beaning the player next time at bat. Ethics brings responsibility. Ethical responsibility means the player has moved from thinking about the self to others, but the self remains.

As baseball commentator Kierkegaard says, no player on second base has ever reached Home plate by running in a straight line toward it. The absurd fact is, that the player seeking Home must run obliquely (beyond logic, proof and reason) from the ethical second base toward the Third Base of religious feeling. The greater the uncertainty, the more likely that this will be a great sports moment, we in the crowd lean forward and making sounds beyond language. The baserunner blurs between third base and home. The ball returns like a cannon shot from the center fielder. The catcher reaches his glove. Unable to see the ball or Home, the Knight of Faith dives into the obscurity, with trust that Home plate will reach back to tag the player’s outstretched hand.

This RallyBird rule pdf (link below) is in progress, but I offer to share it with you. It looks different, but it is the same 1-hour baseball board game with quick decisions for offense and defense each at bat. I’ve added a couple of new variants including Series rules. Also I learned I could add an additional card to the game at no cost to you, so I added a trophy card. The rules include a picture of it. When I proof these rules, mull and ruminate a few more hundred times, I’ll replace the current ones that come with the game with this set.

RallyBird Board Game Rules version May11, 2019

Here is a concise and sensible summary of Kierkegaard’s stages.

You can buy the RallyBird Baseball Board Game here.

Click here for the PDF of the RallyBird Board Game score sheets: RB ScorePage.

There’s one page for the Visitor team (Red) and one for Home (Blue).

Note that unless most regular baseball scoresheets, these align the batters horizontally, the innings vertically. This I think works best with the way the RallyBird board game plays… Take a look!

If your inning happily runs through more than 8 batters, just cross out the Inning numbers in the rows below, and continue.

In each At Bat box, you can write the name of the At Bat tactic below the diamond. You can use the diamond to indicate where the runner advances. I’d trace the line from home plate to first base and then draw an open circle around first base. If that same runner moved to second later, I’d trace that path on the diamond and put a filled circle on 2nd. If the runner makes it home, fill in the diamond. If a batter knocks a runner in, draw a filled in circle in a corner. I don’t know if it’s plausible yet (as this is new), but completists could possibly write the Glove tiles in the field as suggested by the diamond in each box.

At the end of the half inning, on the right side, record the number of hits you earned, how many runners your team left on base after 3 outs (“LOB”), how many of Defense’s Glove tiles you knocked out of the inning (“GloveX”), and of course your Runs. So you can see there is some emphasis of the experience in the RallyBird BoardGame terms.

At the bottom of each page record your game totals. The point is both to give you a numerical picture of the game performance, and to engage you and help you think about the impact of your strategies and tactics.

Don’t forget to write your name on top, where you’re playing, and any other details that will make it fun for you to look back at this scoresheet of your epic struggle and reminisce! And perhaps gloat…

*I received the latest prototype of the *mini* RallyBird Baseball Board Game, which features printed “meeples” (wooden person-shaped pawns) instead of glove tiles! I just need to make a minor change regarding the Outs tokens and revise the rules as needed… Meanwhile, I can’t offer pictures because….

* ….We received the first of several new baseball-o-dynamic RallyBird artwork elements which will I will incorporate as appropriate–including changes to the box. This means work with graphics software to conjure up the image…

*….And therefore I will need to order a new prototype of the *mini* RallyBird Baseball Board Game before sharing pictures.

*….BUT I already made graphic revisions to the standard RallyBird Board Game box, and ordered a copy of just the empty box. The manufacturer’s elves have chalked it on the master board in the queue to make. When I receive the new box, just try to stop me from sharing pictures of it with you!

*A manufacture has stamped out test samples of the 2018 MLB Team Tiles for me, and handed the box to the postal agency to arrive via the saddle bags of jet-powered ponies.

*I paid a “service” (legal) to review my customer facing elements and received a phonebook sized list of suggested changes. Do any of you remember what a phone book is? Included on this list was the jettisoning of my recently completed How To Play video for something shorter. Point taken, and I shed no tears. I merely glance upward with a momentarily stricken face. Then I look back horizontally with my cowboy cheek muscles manfully forcing upward smile factors.

*…Said “service” also had problems with my beautiful, beautiful rules. For example, there was no Overview (due to economy, but no one wants to hear my excuses.) For another example, I didn’t explain what a Double Play is. So with trepidation I add MAJOR RULE REVISION to my To Do list, as confabulating such a document not only requires editing work with words and pictures, but also producing a perfectly sized image file of the page (which then cannot easily suffer editing corrections). All the while, I need to continue to be handsome and not succumb to the call of little birds chirping outside the springtime window. And wait there’s more to do! Bust in all the needed information in a pleasing manner, while keeping in mind that page numbers come in sets determined by the manufacturer, and every extra bundle costs the consumer. We don’t want that! Do “we”?

*….Fortunately I am driven by wild horses as I sit cross-legged in the iron sledge of my determination. One horse is named Pop Fly, and the other is Ground Rule Double. I’m lucky to have these challenges to demolish and smash. So as I get back to work, I will do arm curls with heavy kettle bells to make the challenge a little harder. One-a and a two-a. One-a and a two-a….

Here’s a link to the RallyBird Board Game Rules PDF.

The board game is currently for sale here.

Dynamic and in Depth How to Play video below! Marinade in the How to Play experience as you would a Turkish bath. Also includes FAQ and sample of play.

The RallyByrd Baseball Board Game
Blog at WordPress.com.
Loading Comments...